A new report from the U.S. Government Accountability Office (GAO) provides one of the first large-scale comparisons of special education enrollment between charter and regular public schools. The report’s primary finding, which, predictably, received a fair amount of attention, is that roughly 11 percent of students enrolled in regular public schools were on special education plans in 2009-10, compared with just 8 percent of charter school students.

The GAO report’s authors are very careful to note that their findings merely describe what you might call the “service gap” – i.e., the proportion of special education students served by charters versus regular public schools – but that they do not indicate the reasons for this disparity.

This is an important point, but I would take the warning a step further:  The national- and state-level gaps themselves should be interpreted with the most extreme caution.

Although there are plenty of interesting data contained in the report, and its authors do point out many of the limitations of their analyses, the GAO's approach (and virtually all the press coverage) seems to gloss over the fact that charter schools are disproportionately located in urban, lower-income areas, where special education rates of all schools tend to be higher.

No, not really. The primary reason why charters serve a larger proportion of minorities is because they happen to be concentrated in areas, such as big cities, with larger minority populations. Simply comparing the overall raw percentages doesn’t tell us much, since it’s largely a function of where schools are located.

The same goes for special education. If you want to estimate the “service gap” between the two types of schools, you have to at least try to account for the pool of students that both types of schools serve - e.g., by controlling for student characteristics, comparing charters and regular public schools within the same area, or, ideally, comparing charters with their "feeder" schools. This makes national or even state-level analyses difficult, due to data availability, but it really is necessary if you want to get a sense of the degree to which special education students are over- or underrepresented in charter schools.

(In fairness, the report does include some non-specific descriptions of findings from comparisons within metropolitan areas, which are still limited but far more useful, and the report also mentions that GAO did perform limited district-level comparisons, but no results seem to have been presented. The GAO will hopefully expand upon these analyses in future reports.)

If you calculate the 2010-11 statewide weighted average of special education students in Ohio charters versus regular public schools, it’s roughly equal – around 14.7 percent in regular public schools, compared with 14.4 percent in charters (the GAO report has the difference at two percentage points, perhaps due to differences in our data and the year to which they apply).

However, three-quarters of Ohio charter students are enrolled in schools “hosted” by one of the state’s “Ohio 8” districts – Akron, Canton, Cincinnati, Cleveland, Columbus, Dayton, Toledo and Youngstown.

Students in these districts are more likely than their counterparts in the rest of state to be low-income, non-native English speakers and, of course, in special education programs. A statewide comparison simply ignores this, and thus provides a potentially misleading picture of the size of the special education “service gap."

One rough way to get a better (albeit still highly imperfect) sense of the Ohio gap is to simply compare the rates within districts, as in the graph below.

(Note: Negative numbers mean charters serve smaller proportions of special education students. Also, there are only five charter schools in Canton, so I did not disaggregate it.) 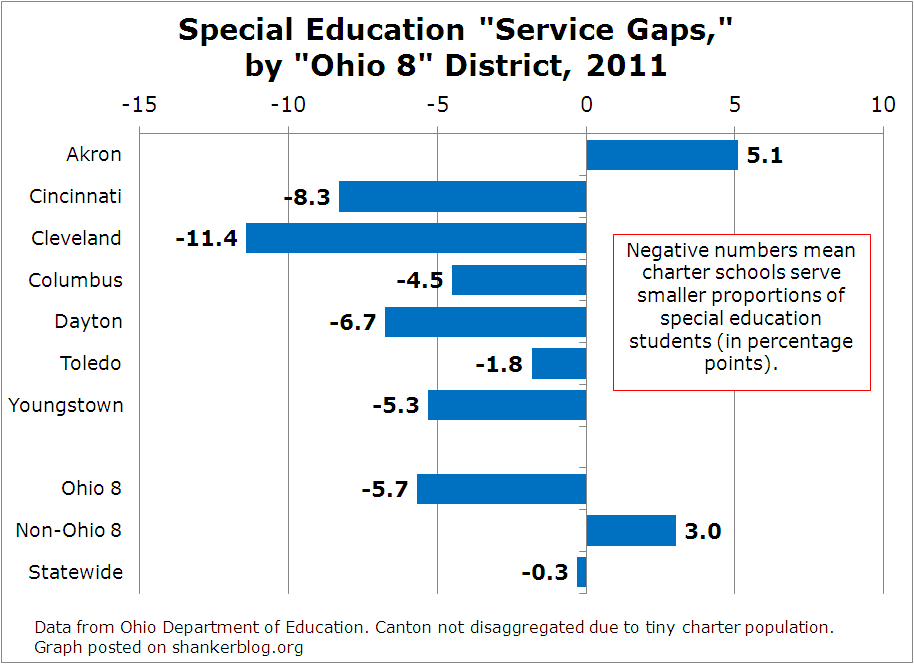 Other than Akron, charters in every “Ohio 8” district serve smaller shares of special education students, on average, than the regular public schools of the district hosting them. Across all “Ohio 8” districts, the gap is about -6 percentage points. So, three out of four Ohio charter students attend schools located in districts where the special education gap is substantial (though, again, what this actually means is open to interpretation).

On the other hand, outside of the “Ohio 8," the opposite is true - charters actually serve larger shares of special education students. The gap is smaller (2-3 percentage points), but it shows how there is, as always, underlying variation to the degree where one might draw different conclusions depending on where one was looking.

In any case, the comparisons above, while still extremely simple, represent a very different portrayal from the raw Ohio gap, which suggests that the shares are roughly equal.*

To whatever degree state-level gaps are meaningful, I strongly suspect you’d find significant discrepancies between "adjusted" and raw overall gaps elsewhere, and that the size of these differences will vary by state.**

In the meantime, it would be wise to resist using this GAO report to draw any conclusions about the extent of differences in special education enrollment between charter versus regular public schools (to say nothing, obviously, of the far more complicated questions of why they arise, and what that means for policy). Such analyses will likely have to continue to proceed on a state-by-state, or district-by-district, basis.

* Just to get a very rough idea of the statewide gap, I ran a few simple, messy regression models, which, controlling for student characteristics and district fixed effects, suggest that charters serve a smaller proportion of special education students by about 2-3 percentage points. If I limit the models to "Ohio 8" districts only, the adjusted gap is 5-6 points, in line with the graph above.

** Ohio may be an extreme case in terms of the difference between raw and adjusted gaps, since charters are so heavily concentrated in "Ohio 8" districts (this was deliberate - they were initially only allowed to open in these districts). Charters might be more dispersed in other states. This is important to remember when looking at the state-by-state comparisons in the GAO report.

The response I always hear to this is, well public schools are over inflating their SPED numbers. Has anyone ever tested that hypothesis? maybe taking a random sample of charter and TPS students and testing them for learning disabilities?

One more point to add: I work at a psychiatric hospital in Chicago where I meet kids from all over the area including many kids from charter schools as well as neighborhood, selective enrollment, private, alternative, therapeutic day, and magnet schools. In my experience, the TYPES of disabilties between charters and the local neighborhood school are strikingly different. Of the dozens, maybe hundreds, of current charter school students I have worked with, almost without expection, none of them have significant acting-out behaviors, severe cognitive delays, or other severe learning problems (although some who no longer go to charters do have these problems). The charter kids tend to be, and I mean almost always, well-behaved, quieter, academically strong kids with anxiety or depression, and might have mild learning disabilities. Meanwhile, we get many neighborhood school kids who are aggressive, oppositional, and have significant learning difficulties. Many probably need more intensive interventions like a therapeutic day school might provide, but there are not nearly enough spots in these schools to accomodate all the kids with severe behavior problems in Chicago.

The percentages mask these deeper divides. The charters in Chicago are not serving the toughest, most expensive kids.

When I see what seem to be astronomical special ed rates for some places (e.g., Cleveland) -- rates that are much higher than elsewhere -- it seems unlikely to me that these are real disabilities with a biological basis -- i.e., autism, real dyslexia, etc. Instead, it seems likely that some kids classified as "special ed" don't really have a biological problem; they just haven't learned very much.

If that's the case, then it seems problematic (to say the least) to suggest that schools should try to have a greater number of kids who don't learn very much.

Good blog and comments. Another wrinkle:

Is there a "service gap?"

I'm wondering when the GAO begins its Chelsea audit...

This blog describes a very important methodological point--one that charter proponents should heed. Most charters (at least in Texas) make a big deal out of serving a greater percentage of economically disadvantaged and minority students than other schools. And, by other schools, they mean all other schools in the state. As you point out, charters are disproportionately in urban areas which serve greater proportions of poor and minority kids. When you compare schools in the same neighborhood, the gap between charters and non-charters with respect to poor and minority students largely disappears. I'd love to see you write a post on that and call out the charter supporters that misuse the data in that way.

Yet, as I show in my forthcoming paper on Texas charter schools, a lower percentage of students designated as special ed (and ELL) enter charters from the local neighborhoods in which charters reside. The same is true when comparing students entering charters from schools that send at least one student into a charter.

My only complaint is that you buried the lede. You make a great case explaining that the disparity between charters and the public schools is even greater than a less sophisticated reaading of the GAO would indicate.

Stuart, no, your speculation does not follow, and the truth is probably the opposite of what you assert. Urban districts have high concentrations of IEP students because they serve the kids who are left behind after most families exercise their panoply of choices.

The most important point was made by KatieO. There is a huge difference between students with learning disabilities or mental health conditions and serious emotionally disturbed or mentally ill students. Back when my school was only 70% low income, it was easy to see who was who, without looking at the IEP. Kids who sat on the front row, kept their notebooks orderly, worked hard and worked smart bell-to-bell, were likely to be LD. Since then, all of those kids have found charters or magnets and are doing wonderfully.

If the principals did not try to assess disciplinary consequences to the chronic hallwalkers who got into fights on a daily basis, it was because they were not allowed to. Those were kids whose out-of-control behavior was linked to their emotional disablities. Principals were not even allowed to suspend them for a knife if the blade was shorter than 2-1/2 inches.
Once we became 100% low income, and had extreme concentrations of kids who were horribly traumatized, it meant that principals couldn't even think about establishing an orderly environment.

I'm struck by how few researchers even try to address that issue. My suspicion is that many researchers are unaware of this huge dynamic.