Our guest author today is Ed Fuller, Associate Professor in the Education Leadership Department at Penn State University. He is also the Director of the Center for Evaluation and Education Policy Analysis as well as the Associate Director for Policy of the University Council for Educational Administration.

“No one knows who I am," exclaimed a senior in a high-poverty, predominantly minority and low-performing high school in the Austin area. She explained, “I have been at this school four years and had four principals and six algebra I teachers."

Elsewhere in Texas, the first school to be closed by the state for low performance was Johnston High School, which was led by 13 principals in the 11 years preceding closure. The school also had a teacher turnover rate greater than 25 percent for almost all of the years and greater than 30 percent for 7 of the years.

While the above examples are rather extreme cases, they do underscore two interconnected issues – teacher and principal turnover - that often plague low-performing schools and, in the case of principal turnover, afflict a wide range of schools regardless of performance or school demographics.

In recent years, those seeking to improve schooling through efforts to increase teacher effectiveness and build teacher capacity have quickly realized that such efforts rely heavily on principal capacity and stability.*

Indeed, a number of recent research efforts have found that principal turnover is important for three primary reasons.

First, research has shown that high principal turnover often leads to greater teacher turnover (Béteille et al., 2011; Fuller et al.2007) which, in turn, can have a negative impact on student achievement and other schooling outcomes (Ronfeldt et al., 2011; Fuller et al.2007), as well as increase fiscal costs (Levy et al., 2006). For instance, Ronfeldt and his colleagues found that, “teacher turnover has a significant and negative effect on student achievement in both math and ELA . . . [and] is particularly harmful to students in schools with large populations of low-performing and black students” (p. 16).

Finally, research suggests that regular principal turnover can lead to teachers not investing in any change efforts and learning to simply “wait [principals] out." (Hargreaves et al. 2003, p. 8). As a result, it also decreases the probability of school improvement (Fullan 1991). Thus, research suggests that principals must be in place at least five years for the full implementation of a large-scale change effort, including the recruitment, retention, and capacity-building of staff (McAdams 1997; Seashore-Louis et al. 2010).

What does principal turnover look like? I have worked with several colleagues (Michelle Young, Bruce Baker, and Terry Orr) to examine the extent and characteristics of principal turnover, using data from Texas that spans the years 1989 through 2010,

There are three important specific findings, which illustrate and expand upon the conclusions from the literature discussed above.

First, as shown in the graph below, newly hired principals simply do not stay at the same school for very long periods of time, particularly in middle- and high-schools.*** 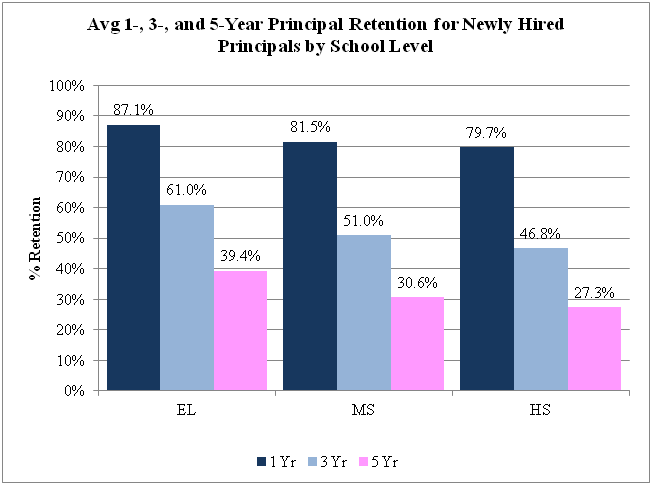 Second, the initial level of achievement at the school in the year before the principal arrives is associated with the first-year principal retention rate. As shown below, there is a fairly large difference in the one-year retention rates between newly hired principals at the lowest- and high-performing schools (with performance measured vis-à-vis nearby schools). These initial differences increase further after three years (not shown in the graph), such that there is a 20 percentage point difference in the retention rates for middle and high schools and a 15 percentage point difference at the elementary school level. 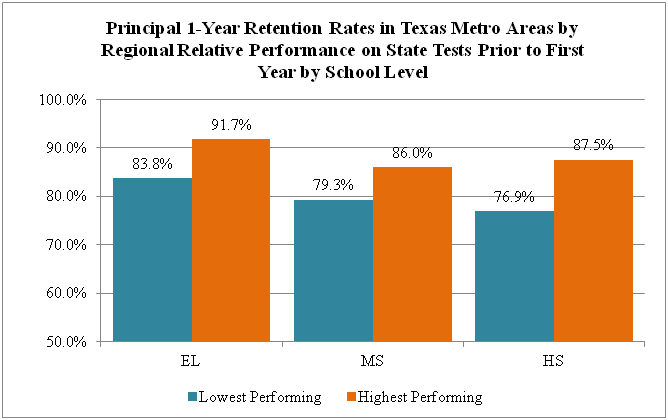 Third and finally, as noted in the literature review above, the same schools with high levels of principal turnover also have high levels of teacher turnover. The graph below suggests that this is especially true at the secondary level (Remember that these are one-year attrition rates; the gaps become larger after three- and five-years. For urban high schools in Texas with high principal turnover, it is not uncommon to see five-year teacher turnover rates greater than 60 percent.)

The higher teacher turnover that stems from principal instability of course has other side effects as well. For example, as shown below, schools with high principal turnover also have a higher percentage of teachers assigned out-of-field. 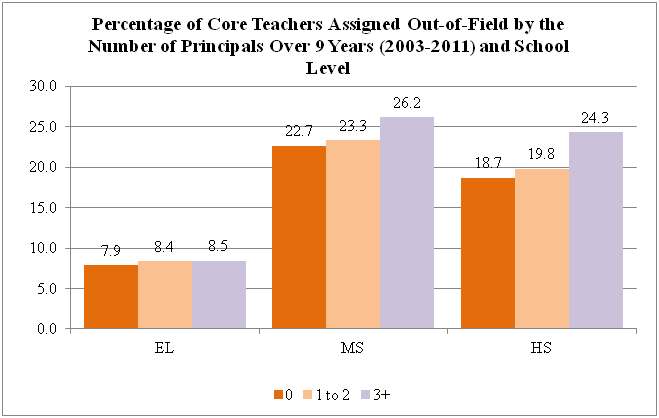 They also, as might be anticipated, have more beginning teachers, as shown below. 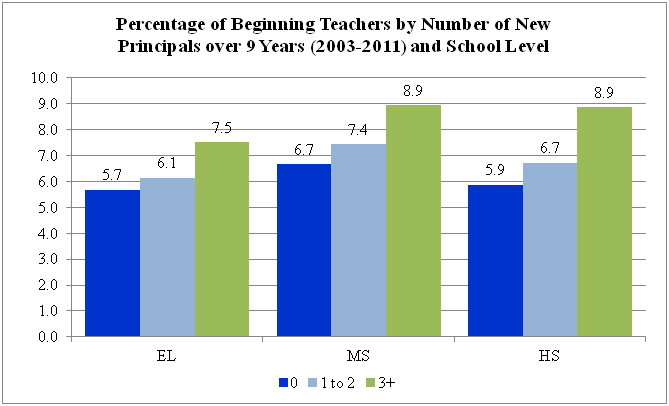 Despite frequent implications that one way to improve low-performing schools is to replace its principal and to do so with greater frequency (see, for example, here), the evidence suggests that there are serious downsides: Rapidly turning over principals leads to more problems for the school in terms of greater teacher turnover, greater difficulty in recruiting well-qualified/effective teachers, and increased reluctance of staff to invest in reform strategies. All of these issues ultimately have a negative and long-lasting impact on the school’s achievement profile.

What causes principal turnover? Where do all these principals go? Who gets hired to replace those leaving a school? What can districts and others do to stem the tide? Surprisingly, there is very little research in these areas, as will be discussed in future posts.

* Some researchers and policymakers strongly disagree about an acceptable level of turnover and some even support greater turnover of those teachers deemed the least effective through efforts such as value-added teacher evaluations. Recent research, however, points out that teacher turnover, regardless of the effectiveness of those teachers leaving a school, tends to have a negative impact on student achievement.

** Disclosure: I was a paid independent reviewer for this study.

I realize fig. 2 gets at this indirectly, but how do student bodies perform when they have high versus low turnover (after controlling for demographics, etc.)?

Very recent research (we are talking 3-4 papers) suggest that principal turnover has a direct negative effect on student achievement. Further, the recent RAND study I cite above suggests that not only is the effect direct and negative, but relatively long-lasting over time. Other research ties principal turnover to teacher turnover and then a different body of literature ties teacher turnover to having a negative effect on student outcomes. Thus, there may be both an indirect effect (primarily through staff capacity, quality, and stability) and a direct effect that I would argue (with no evidence to back me or anyone else up) is related to the overall disruption, decrease in trust, and increase in anxiety caused by turnover which makes for a generally worse school climate. This entire area needs much, much more research.

I think there's a selection story that isn't being told by these data that may yield some insights into the sources of principal turnover (Ed may have done this elsewhere, and I just missed it). What are the differences between principals who are selecting struggling campuses? Are they new principals? Is it their first job? Where do they come from? Are they promoted APs from inside or outside of the school? And, importantly, where are they going when they leave?

I'm also curious whether some of these associations hold if you moved away from static measures of performance to looking at campus-level growth. What if schools' performance is improving? Are they less likely to leave? Is turnover less severe?

There also seems to be an assumption that teacher turnover is a function of principal turnover ("stems from"). I do wonder whether these aren't just spurious manifestations of chronically underperforming schools, or whether teachers actually leave in response to a principal leaving. One way to disentangle this would be to identify high/low performing campuses with high/low principal turnover (assuming there are any), and examine whether the associations with teacher turnover hold.

Marshall--thanks for the comment. I will review some more of these details in future posts (assuming Matt will graciously post them). But a few points. First, turnover is pretty high everywhere. Second, principals at low-performing (and all schools) are more likely to remain in their school for at least one year and up to three years. However, even after controlling for growth, my research suggest that the accountability rating and/or absolute level of initial performance are still negatively associated with staying at a school even after controlling for growth.

Where do they go? Most principals that leave low-performing schools disappear entirely from the public school database and never appear again. Principals in high-performing high schools (particularly white males) go on to superintendent and associate superintendent positions. This creates a huge disconnect because very, very few district leaders have any experience--much less success--in low-performing schools, thus likely cannot provide much guidance to newly hired principals in those schools and probably don;t even understand the context within which the principal has to operate.

Again, I'll lay out some more of the details in future posts.

I look forward to seeing more of your work discussed here, Ed.

I am currently doing a dissertation on the effects of frequent principal turnover and I am very impressed that most of the authors that are listed in this article are also listed in my literature review. I am studying this phenomenon because it is an experience I have lived. Going through six principals in a seven year period at a low performing school is no laughing matter. The only way to stop this type of insanity is to provide enough studies with information to prove that this type of turnover REALLY is detrimental to the students that we are supposed to be educating. If we do not stop the ritual scapegoating and vicious cycle of frequent principal turnover, what will we have to look forward to? Possibly an under-educated population that is dependent on more government assistance to support itself.