Are Americans Exceptional In Their Attitudes Toward Government's Role In Reducing Inequality?

As discussed in a previous post, roughly half of Americans believe that government should take some active role in reducing income differences between rich and poor, though, as one would expect, this view is less prevalent among Republicans, more educated and higher earning survey respondents.

These data, however, lack a frame of reference. That is, they don’t tell us whether American support for government redistribution is “high” or “low” compared with that in other nations. The conventional wisdom in this area is that Americans generally prefer a more limited government, especially when it comes to things like income redistribution.

It might therefore be interesting to take a quick look at how the U.S. stacks up against other nations in terms of these redistributive preferences.

I’m using simple data from the 2006 Role of Government Survey of the International Social Survey Programme (ISSP). The ISSP surveys respondents in about 35 nations, and it is specifically designed to enable these sorts of comparisons. The graph below presents the distribution of responses to the question of “whether it should be government’s responsibility to reduce income differences between rich and poor." The dark green bars represent the percent of respondents who think it “definitely should be” government’s role, the light green represent “probably should be," the pink “probably should not be," and the red “definitely should not be." 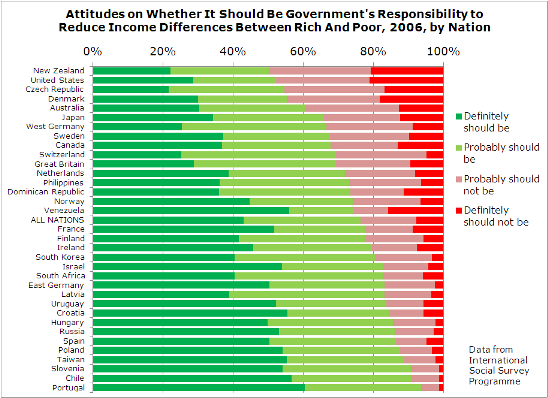 The graph indicates that Americans’ support for government’s role in reducing income differences is among the lowest of all ISSP nations. In fact, in terms of total agreement (“probably should be” plus “definitely should be”), the U.S. ranks second lowest, trailing only New Zealand (it is actually a statistical tie). It seems that Americans do indeed exhibit unusually low support for government’s role in reducing inequality, compared with their counterparts in these other nations.

The results for other countries are equally interesting, and don’t always play out as might be expected. For example, one might anticipate that respondents in nations such as Sweden and Denmark, which have very large social democratic welfare states, would express relatively high support for government redistribution. The idea would be that support for government’s role in income redistribution both reflects and leads to (via policymaking) lower levels of income inequality.*

This is not entirely the case, at least not compared with the other nations participating in the ISSP. In both nations (as well as in others with large welfare states, such as Canada and Great Britain), support is considerably higher than in the U.S., but still below the average.

Just to quickly probe a bit deeper into this issue, the scatterplot below presents the relationship between overall inequality and agreement that government should reduce income differences (the total proportion of ISSP respondents saying it "probably should be" or "definitely should be"). Actual inequality is measured in terms of Gini coefficients, a widely-used metric – Gini coefficients range from zero to one, with zero represents perfect equality (all incomes are equal), and one reflecting maximum inequality (one person has all the income). These data are taken from the OECD, which means that not all the nations in the ISSP sample are included in the graph.** 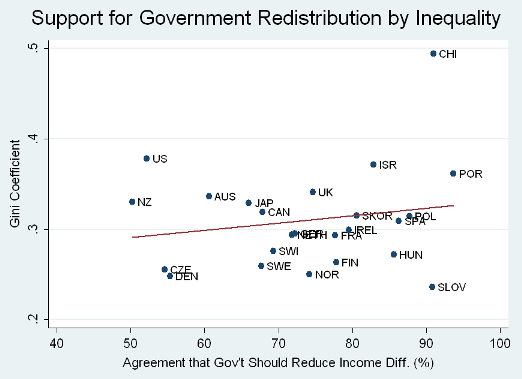 Clearly, there isn’t a particularly strong relationship between overall inequality and support for government’s role in reducing income differences (the correlation coefficient is 0.185).

In summary, then, there is considerably less overall support for government’s role in reducing income differences in the U.S. compared with virtually all other nations in the ISSP sample. Moreover, while my analysis is crude and the data cross-sectional, simplistic explanations for these attitudinal differences – such as the idea that lower inequality leads to and reflects more support for government redistribution (or the converse) – don’t seem particularly powerful.

* The opposite dynamic is also plausible - that people in nations with low inequality might, all else being equal, tend to express less concern for income disparities as a national problem, and thus see less of a role for government in reducing them (see this recent NBER working paper for more on this issue).

** Gini coefficients are for the total population, after tax and transfers, during the mid-2000s (when the ISSP data were collected).

I'm a Finn. I was somewhat struck by the differences among the Nordic countries in the opinion poll, despite similar Gini coefficients, cultural backgrounds and current GDPs per capita. Finland was by far the poorest of these nations in the post-WW2 period. The construction of the Finnish welfare society was largely modelled on Sweden, which did not suffer dramatically in the war. I guess there is some of that spirit still left. The Finnish political culture is famously, or possibly infamously, consensus-seeking, having been formed by a series of historical necessities to pull together.

To some extent the opinion poll results in all of the Nordic countries may reflect a recent or current right-wing political trend. The Swedish government was led by the Social Democratic party for a very long time until a center-right coalition came into power in 2006. The then-new conservative prime minister, still in office, Fredrik Reinfeldt has said some things in his youth about minimizing the role of the state that sound like they might have come from the mouth of Ron Paul. Reinfeldt has since matured and he leads a coalition where he needs to compromise, but nonetheless, his win in the elections was a major shift in Sweden. Finland has had a somewhat similar experience, but the rhetoric of the Finnish conservatives is generally mellower, and several of the governments since the mid-90s, including the current one, have been very broad-based "rainbow" coalitions (e.g. currently there is a social democratic minister of finance and a conservative prime minister in the same government).

I think the government (us, in theory) should be responsible in redistributing the income. The problem is that the narrative has been hijacked. The government is already redistributing the wealth in a big, big way. They are taking the tax money and made-up money (creating deficit) and giving it to banks, corporations, and military contractors.

This idea that to get a little bit more to the people in need is class warfare is ludicrous. There is already class warfare, with the government fighting and winning for the wealthy.