With all the recent coverage of Occupy Wall Street and President Obama’s jobs bill, we’ve heard a lot of polling results showing that a large plurality of Americans supports raising taxes on high earners, and that this support is strong among both Democrats and Republicans.

The campaign to raise taxes on high-income households is part of a larger ideological notion that reducing inequality by such means as taxation and welfare programs is a proper function of government. Supporters (e.g., Democrats) argue that progressive taxation helps to ensure that high earners pay their “fair share” in supporting the public resources, such as schools, roads and law enforcement, that are necessary (but not sufficient) for their success. Republicans, on the other hand, tend frame the issue directly in terms of government intrusion – the government is unfairly “picking winners and losers," and stifling innovation and risk-taking. The assumption seems to be that many Americans don't care for the generic idea of government taking an active role in reducing the gap between rich and poor, even though they tend to support many of the specific means by which this occurs, including not only raising taxes on high earners, but also public education and programs like Medicaid.

So, it might be interesting to see what Americans think of the broader idea that government has a legitimate role in reducing income inequality. Let’s take a quick look.

I’m using General Social Survey data, which asks respondents whether “the government in Washington ought to reduce income differences between the rich and the poor, perhaps by the raising taxes of wealthy families or by giving income assistance to the poor," or if “the government should not concern itself” with such an effort.

In the graph below, I present responses to that question (see the figure’s notes for details). To increase sample size, I pooled data across the 2006, 2008 and 2010 surveys, but the overall distribution of responses isn’t much different between years. (Note: GSS data are currently only available up to 2010; it’s quite likely that attitudes on this issue have changed somewhat over the past year.) 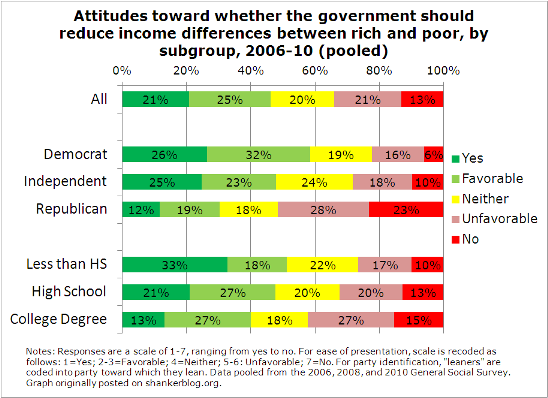 Overall, roughly half (46 percent) of Americans have a favorable view of government reducing inequality, with one in five feeling rather strongly. About a third don’t think too highly of the idea, but only one in ten are strongly opposed. So, even when the question is posed in terms of “government’s role," there is more agreement than disagreement for redistribution. A fairly large proportion (20 percent) of Americans, however, are on the fence.

There are also, as usual, pretty severe party-based splits. The majority of Republicans are actually opposed, while a similar proportion of Democrats support redistribution. Perhaps most interestingly (and importantly), self-identified independents are somewhere in between, but they are much closer to Democrats than Republicans – about half are supportive, and only about three in ten are opposed.

Also significant – though less pronounced – are the differences by education. The more education one has, the less likely one is to support redistribution, especially strongly. These education-based discrepancies, of course, are in part a function of income differences – more educated people tend to earn more, and would therefore have a greater self-interest in avoiding active government efforts to reduce inequality. The breakdown by income is presented in the graph below. 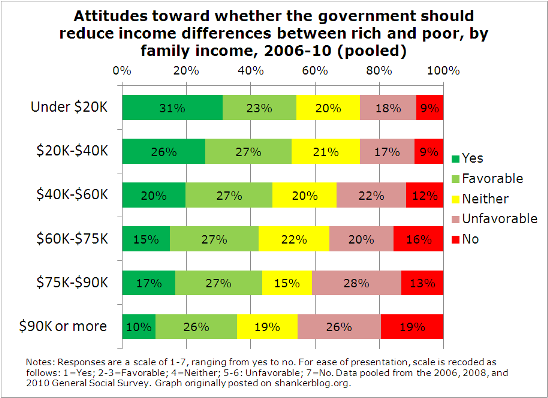 As might be expected, people with higher incomes hold less favorable views toward redistribution, on average, with around half (45 percent) of the highest earners expressing opposition, and over half of the lowest earners expressing support. These income-based differences are more pronounced in the distribution of “strong yes or no” responses than they are in the “favorable," “neither," or “unfavorable” categories. For example, the proportion of the highest earners who believe affirmatively in government’s role in reducing income differences (the dark green sections of the graph) is about one-third that of the lowest-income respondents, but similar proportions of both groups respond favorably but not strongly so (the light green sections).

I ran a few regressions with these data, which controlled for a dozen or so characteristics, including not only education, party and income, but also age, race, marital status, union membership and a few other variables. The differences by education,income and party are statistically significant at any conventional level. On the whole, party identification maintains by far the strongest association with redistributive preferences. This is not at all surprising, especially since the question wording provides examples of how governments accomplish redistribution - taxation and social welfare programs - that are strongly partisan issues (it would be interesting to see if responses change when these examples are not given).

Finally, one might wonder whether opinions of government's inequality-reducing role are changing over time. Let’s take a quick look. 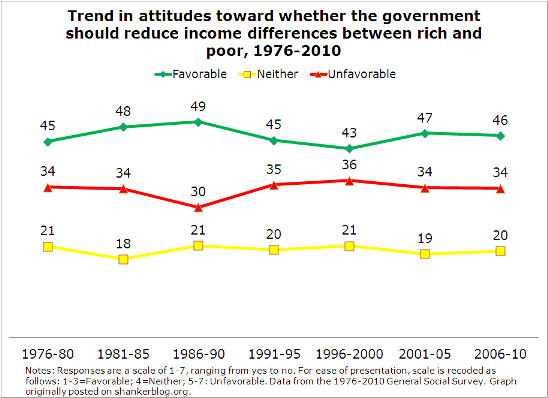 As the graph indicates, there really hasn’t been much movement in redistributive preferences since the mid-1970s. In all time periods, about 45-50 percent are supportive, 30-35 percent are opposed and about one-fifth are neither.

(Notice that, just to keep the graph readable, I collapsed the “yes/no” and “favorable/unfavorable” categories, but responses are consistent over time even when these responses are separated.)

So, overall, people’s attitudes on whether the government should reduce income inequality does, to some extent, split along expected lines, with Republicans, more educated and higher-income people expressing less agreement. And, without question, people respond differently when asked about government’s role in reducing inequality than they do when asked about specific proposals such as raising tax rates on high earners. They are far more likely to support raising taxes on the rich than they are to agree with the generic idea that government should reduce inequality. Furthermore, when it comes to the latter, there is not an overwhelmingly high level of support among any group.

Nevertheless, these data suggest that a fairly large proportion of Americans believe government has a role to play in reducing income inequality through measures such as more progressive taxation, and that this support may be stronger than the opposition.

Well no duh the 99% wants to take from the 1%! Wouldn't it be awesome if you could set your own wages at work too! This is ridiculous. Who cares what the American people "want". What happened to the right to own property and use it as the individual sees fit. Why is this even an issue? How does anyone with half a brain not see what is fundamentally wrong with this mob rule mentality where anyone who has money is up for grabs via government taxation. I swear you people read the story of a couple dishonest businessmen, suddenly assume every millionaire must have screwed you over, and to atone for that, they must pay 50% or more tax on their money. When you go buy a burger at McDonald's, your cashier doesn't charge you based on what you make, where the heck does our government get off thinking that they can charge based on that either.