Economic Shocks And Attitudes Toward Redistribution

In the wake of the financial crisis that began in 2007, as well as the subsequent recession, there has been a great deal of attention paid to income inequality. Specifically, there was a pervasive argument among many Americans that the discrepancies in income between the top and bottom are too large, and that the fruits of economic growth are predominantly going to the highest earners (the so-called “one percent”).

Among those who believe that income inequality is too high, the solutions might include policies such as more progressive taxation, stronger regulation, and more generous policies to help lower income families. That is, they might generally support some increased role for government in addressing this issue. Insofar as individuals’ attitudes tend to respond to changes in their own circumstances (e.g., Owens and Pedulla 2013), as well as to overall economic conditions, one would possibly expect an increase in support for government efforts to reduce inequality during and after the financial crisis.

We might take a look at this proposition using a General Social Survey (GSS) question asking respondents to characterize their support (on a scale of 1-7) for the statement that the government should reduce income differences between the rich and poor. The graph below presents the average value of this scale between 1986 and 2014. Note that higher values in the graph represent greater support for government action. 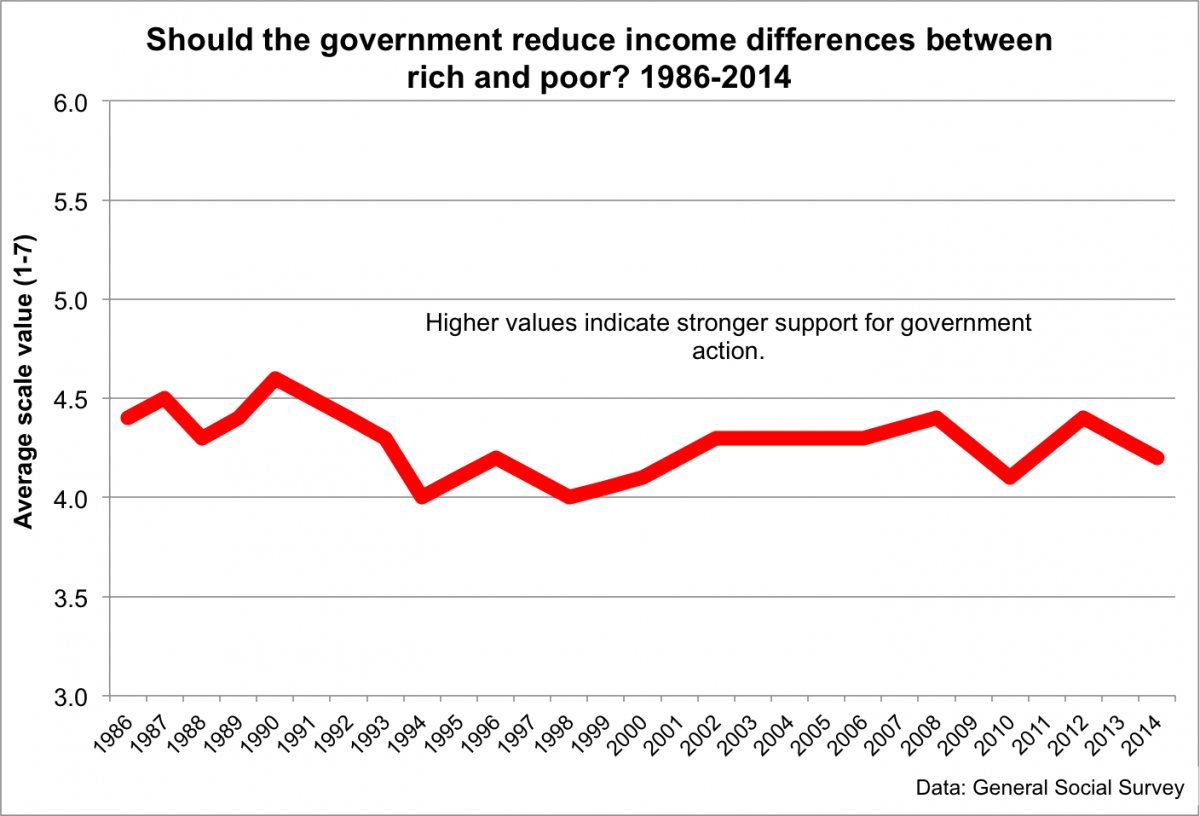 These results are somewhat interesting. The first GSS survey conducted after the financial crisis started was in 2008, before which time there was a slow and steady increase in support dating back to the late 1990s. Yet, between 2008 and 2010, there is a sharp decrease in support for government efforts to reduce income inequality, followed by an almost identical increase between 2010 and 2012.

This u-shaped trend between 2008 and 2012 may surprise some people. That is, one might have expected at least some increase in support for the government’s role in reducing inequality directly after the financial crisis. And the fact that it decreased between 2008 and 2010 might be even more unexpected.

Now, of course, we should avoid overinterpreting the changes in the graph above. They are significant, but not massive. Still, that said, there may actually be some good explanations for the u-shaped trend, or at least a case for not expecting attitudes to respond neatly to even the most drastic economic shocks.

Perhaps the most common, basic hypothesis, sometimes called the “median voter hypothesis,” would predict a positive relationship between support for redistribution and the amount of inequality. When inequality increases, the income distribution is “stretched” out – i.e., the higher earners earn more (thus increasing the average), but most people are still clustered at the bottom (the median might stay relatively constant). As a result, the median voter’s pretax income decreases relative to that of the mean (or average) voter. And so the median voter would, so goes this story, view his or her own position as one in which he or she can pay less in taxes than the average voter but receive the same amount of services, and so welfare support is stronger when inequality rises. Because individuals are rational, they support policies that bring net benefits to them.*

Many researchers have pointed out (e.g., Kenworthy and McCall, 2008), however, that the hypotheses predicting a relationship between the amount of inequality and support for redistribution rest, among other things, on the assumption that individuals have accurate information about the level of and trends in inequality. Yet the empirical evidence suggests that the correlation between perceived and actual inequality is imperfect at best, and that people tend to overestimate the size of the middle class and underestimate the gaps between the top, middle, and bottom of income distribution (e.g., Osberg and Smeeding 2006).**

That said, the onset of the financial crisis and subsequent recession in 2007-2008 did spark much debate and discussion about inequality, and perhaps this information simply took some time to spread around (it is worth noting that the “Occupy Wall Street” movement began in late 2011). This is purely speculation, but it could help explain the u-shaped trend between 2008 and 2012.

On an important, related note, attitudes toward the government’s role in reducing inequality (and in many other arenas) are not purely about self-interest. For example, changes in support for redistribution can result from shifts in perceptions of who benefits from policies aimed at reducing inequalities, or views on the root causes of poverty. Previous research (e.g., Alesina et al. 2001; Luttmer 2001) has demonstrated that there is a strong racial and ideological component to welfare preferences.

In other words, changes in economic conditions, including those that resulted from the financial crisis and recession, often do not map neatly onto attitudinal shifts, as they do not necessarily alter individuals’ perceptions and premises. So, people might have been made more aware of inequality as a result of the financial crisis and recession, but their ideological beliefs about what to do about it (if anything) may not have changed.

Similarly, drops or increases in welfare support over time may also be related to major mobilization on the left or right following the introduction of welfare-related reforms – the drop in the mid-1990s follows the 1994 Republican Revolution during Clinton’s first term, and the drop between 2008 and 2010 coincides with the Tea Party’s formation in response to the health care debate. From this perspective, then, deteriorating financial conditions might spark government correction, which might in turn lead to mobilization of people against those policies and, thus, shifts in attitudes.

Finally, recent research (e.g., Rehm et al. 2012; Cusack et al. 2006) claims that the support for redistribution and welfare programs is greater if the alliances behind the support cut across income brackets and classes, and these alliances shift depending on the labor market situation and types of economic shocks. This research frames demand for welfare in terms of providing insurance against economic risks.

If risk-exposure affects groups other than those with low-income (for example, persons with highly specific skills or incumbents of occupations with high unemployment rates), the support for redistribution will be greater, as more groups seek insurance. As government interventions can reduce risk for some groups but not others, the support alliances may shift depending on how many groups or people perceive themselves as risk-exposed. And, as these alliances shift, so too may trends in expressed support for redistribution.

In any case, we cannot explain definitively the somewhat counterintuitive trend in attitudes toward government redistribution in the graph above, at least not beyond speculation. But it bears noting that even though attitudes are complex and multidimensional, there are theories and research that can help explain why aggregate attitudes do not always move as we might expect.

** Some argue that people have much more accurate views of the actual levels of inequality than most of the research shows, and the distorted views are an artifact of the measures used, rather than actual misconceptions regarding the income and wealth distribution (Eriksson and Simpson, 2012).

Permalink
Thanks, nice piece. Comment: Any economic theory that rests on the assumption that people are 'rational' has been pretty much shattered, so we can drop that one out. Also, what is 'government action'? Pretty abstract and ideologically charged. Income inequality also is an abstraction to most people; terms like fairness, the availability of good-paying jobs, job security, etc. are more accessible, but economic studies tend to shy away from such expressions. One of the issues we face is that the economic profession itself is in crisis; the market-based, 'neo-liberal' consensus that ruled policy for more than three decades is broken, reputations have been tarnished, policy is in disarray and economic nationalists of the right and the left have found traction among substantial numbers of voters. Attitudes shaped by years of bad policy informed by deeply-flawed economic theories are, naturally, tough to capture. Given the stakes, though, this is an area that needs a lot of attention and I'm glad you guys are making a contribution.
Submitted by R. Garton on September 2, 2016