Our guest author today is Heba F. El-Shazli.  She has 25 years of experience in the promotion of democracy, independent trade unions, political and economic development. She has worked with institutions and leaders throughout the Middle East and North Africa (MENA) to challenge authoritarian regimes. Currently she is an adjunct professor at Georgetown University's Center for Democracy and Civil Society. The views expressed here are her own.

Amid the political and social chaos that reigns in Egypt today, a semblance of normality persists: People go to work; they buy food; they try to feed their families.  And, as in the past, Egyptians employers, with the active support of the Egyptian government, flagrantly violate fundamental workers rights. Workers are fired for trying to organize unions and they are not paid what they are owed, including legally mandated bonuses, profit-sharing and health care benefits or proper safety equipment.

There is a familiar political dimension to these events. Elements in the police and military are accusing workers who protest employer abuses of being “terrorists” -- which in today’s Egypt means members or supporters of the Muslim Brotherhood (MB). In a recent New York Times article, two Egyptian media sources claimed that the workers striking at the Suez Steel company were infiltrated by MB activists attempting to “destabilize” the country.

This is an accusation supported neither by the facts, nor the history of blue collar unions.

Furthermore, not once did a local source, not Suez city officials quoted on the Suez municipal website nor the government newspaper, Al-Ahram, nor the English-language on-line Egypt Independent nor  the Center for Trade Union and Worker Services (CTUWS) mention a link between the workers at the Suez Steel company and the Muslim Brotherhood.

Apparently, it is once again fashionable -- as it was during the Mubarak era -- to claim that any protester for any cause is a Muslim Brotherhood supporter.

These accusations are especially absurd when they are aimed at Egyptian blue-collar workers, whose politics have always had a practical cast. As just one example, there is an iconic photograph taken during the September 2006 strike in El Mahalla’s garment and textile industry, in which many workers, under siege by Mubarak forces, are seen holding up their membership cards in the Mubarak government’s political party, the National Democratic Party (NDP).

Of course, workers are free to choose their political affiliations and support the movement or party of their choice. Yet to claim that these current blue collar worker protests had to be crushed by force because of suspected Brotherhood ties is simply not borne out by the history of these unions and their members.

As one media outlet put it: “Before Morsi’s ascent to power, the MB had a negligible presence within Egypt’s blue-collar labor unions, but was tremendously influential within the white-collar professional [unions]."

In truth, the interim government put down these protests over workplace grievances because it doesn’t have the capacity -- or the desire -- to mediate a constructive resolution to the underlying disputes. It is far easier, it seems, to rely on the army and police, traditional instruments of state repression. The new regime has employed these old tactics against textile workers at Mahalla’s famed Misr Spinning and Weaving Company, as well as the steelworkers in Suez.

Not surprisingly, the growing sentiment among workers is that the military is being deployed to frighten them into accepting ongoing violations of international labor rights norms. 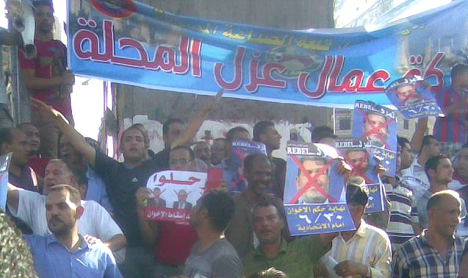 The workers have genuine cause for alarm. Ironically, these so called “pro-MB” unions were already under great pressure from the deposed Morsi government. As a result, in June 2013, the International Labor Organization’s (ILO) once again cited Egypt for violating worker rights and placed it on the black list. The Standards Committee of the ILO concluded that Egypt had violated international conventions, particularly those allowing for the creation of independent unions. It also had not issued a new labor law or amended the current one, according to standing ILO recommendations.

The interim government’s Ministry of Manpower has submitted a new draft labor unions law to be reviewed by the Cabinet of Ministers, but in Egypt, there is law and there is life in the streets. At the same time it is drafting new and supposedly improved labor law language,  the interim government is using strong-arm tactics to bully workers out of standing up to protect their legal benefits or to protest against labor law violations.

How Egyptian workers are treated -- whether their right to organize and assemble is respected, and whether they can go on strike peacefully and without fear -- must be at the core of any assessment of Egypt’s stability and the prospects for a real democratic transition.  The dire situation Egypt’s workers are faced with today does not bode well.