In a previous post, I showed how the majority of funding for education and other public services comes from state and local tax revenue, and that low-income families pay a disproportionate share of these taxes (as a percentage of income).

One of the reasons why this is the case is that many corporations – especially the largest and most profitable – have managed to avoid paying most of the state taxes that they owe (45 states have some form of business tax).  State corporate income taxes (CIT) are levied on business profits – so, for the most part, it’s only the highest-income individuals who are liable (through the businesses they own) for corporate taxes (the top 10 percent wealthiest individuals own about 90 percent of all corporate stock).

A 2005 joint report by Citizens for Tax Justice and the Institute on Taxation and Economic Policy took a close look at state CIT payments by 252 Fortune 500 companies between 2001 and 2003. Their findings were astounding. These corporations were able to shelter roughly two-thirds of their actual profits from state taxation, while 71 of them paid not a penny in state taxes during at least one year between 2001 and 2003.  During the years they paid no taxes, these 71 companies reported $86 billion in profits to their shareholders.

In other words, 71 Fortune 500 companies paid zero state corporate income taxes, while as a whole, the 252 paid tax on only about one-third of their actual profits. For example, in 2001, IBM made roughly $5.6 billion in profits, but paid no corporate income tax to any state.

As a consequence of this evasion, the proportion of state revenue coming from corporate profits has decreased steadily over the past 30 years, leaving the rest of us to shoulder a greater share of the burden for education and other vital services.

The simple graph below presents the percentage of total state revenue coming from CIT between 1977 and 2008. The data come from the U.S. Census Bureau. 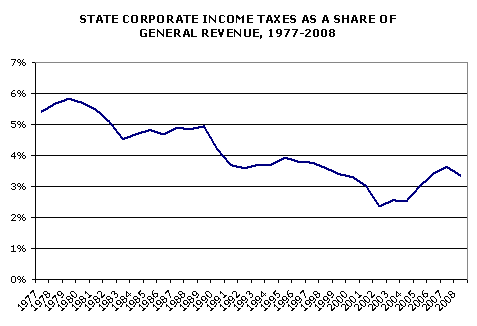 The proportion of states’ general revenue from CIT was basically cut in half during this period (there is a similar decline when tax revenues are measured as a share of GDP). The decrease in the graph is about 2.5 percentage points, and that is equivalent to roughly $40 billion in state revenue today, representing almost one-third of the projected budget shortfalls for FY2011 (note, however, that this is only a very rough illustrative estimate, especially since corporate profits have suffered due to the recession).

So how did state corporate income tax collections erode at the same time that corporate profits were soaring? The disturbing answer is that many companies avoided taxation without breaking a single law.

There are many tax avoidance strategies, and the details are complex. In some cases, states invite it by aggressively offering tax breaks in exchange for the “economic development” that results from corporations moving in (and public disclosure of these subsidies is often lacking).

In most cases, though, corporations use clever accounting tricks, like declaring all their profits in fake "shadow companies" that are set up in states that have no corporate taxes (e.g., Delaware), or, similarly, in other nations that serve as corporate tax havens (thankfully, some states have started closing these loopholes, most notably through the use of combined reporting, which requires all profits made in a state to be declared in that state).

Now, some people argue that states are justified in permitting these loopholes – or in providing direct tax incentives for businesses to set up shop in their states – since taxpayers receive other “economic development” benefits, such as higher employment.  You might also hear the argument that some CIT is indirectly paid by everyone, even low-income families, since businesses just pass it down to consumers through higher prices.

But it is difficult to justify the fact that this corporate tax avoidance, regardless of its "benefits," has the end result of saddling everyone else – especially the lowest-income families – with a larger share of the burden of paying for vital public services, such as education (which is almost entirely funded by states and localities). Some corporate income taxes may be indirectly paid by everyone, but so are the consequences of its erosion (rather directly at that).

It also seems to me that no argument can account for the fact that dozens of the largest corporations in the world—some larger than the GDPs of entire nations—have managed to avoid paying any state income taxes at all. And those that do pay taxes often pay only a fraction of what they owe.

So, again: the next time you hear about layoffs of teachers or other public servants, or about massive program cuts, or how education or other public spending is “unsustainable," go take a quick look at the list of corporations that paid no taxes between 2001 and 2003. You will find some of the largest and most profitable institutions on Earth. Then tell me if there isn’t a better way to fund our public services?

I am sympathetic to the argument that the lower-income people are shouldering more of the burden of public spending but going after corporations is not the solution. It's not just that they pass on costs to consumers but that corporations are comprised of individuals. The solution is a more progressive tax structure while also raising capital gains taxes on individuals. If a wealthy person wants to leave the country fine but I doubt they will, while corporations, as you say, have a easier time setting up shadow entities. It's a mistake to treat corporations like persons from a legal perspective so from a tax perspective we should be consistent as well. Of course the wealthy will kick and scream about having their tax rates raised but no more than if we raised corporate rates. Putting the burden on wealthy individuals has the added benefit that if they want to whine about their taxes they have to look at their workers with a straight face at the same time. With corporate taxes they can always blame taxes for falling wages. Try telling your workers they don't get a raise this year because allowing Bush's tax cuts on incomes over $250,000 are hurting their pocketbook. Imagine...