The Importance Of Relationships In Educational Reform

There are many reforms out there; what if these ideas are not working as well as they could because educators are simply not communicating or building meaningful relationships with each other or maybe the conditions in which they do their work do not support productive interactions?  These are important issues to understand and our research, some of which we highlight in this post, underscores the importance of the relational element in reform.  To further explore the social side of the change equation, we draw on social network research as a way to highlight the importance of relationships as conduits through which valued resources flow and can bring about system-wide change.

A few years ago Arne Duncan noted that "[NCLB] has created a thousand ways for schools to fail and very few ways to help them succeed.”  We think that may have to do with the over reliance on technical fixes, prescriptive approaches and the scant attention to the context -- particularly the social context -- in which reforms are implemented.  But what would things look like if we took a more relational approach to educational improvement?

Imagine for a moment that you are the head of a large organization that is failing on whatever performance measures are deemed important.  You push “knowledge” into the system through meetings and informational resources.  You set aside time for meetings to share this knowledge and/or require that employees work together to make sure everyone is on the “same page." After doing this, as many reforms suggest you should, you find your organization continues to fail.  This does not make any sense, you think to yourself: Your employees have the knowledge they need now -- you have ensured that -- how can failure continue?

So, wisely, you start asking around and find out that your point person delivering the knowledge is not trusted; that your employees do not know how to act upon the knowledge. In fact, your employees may worry that jobs will be lost if they ask for help in interpreting the new information and putting it into practice, or they may go to meetings and “acquire” new information, but because of distrust, fear of failure or fear of being sanctioned they do not incorporate the new knowledge into their work.

In other words, interestingly, you may perceive the information as the problem - "if only I had the ‘right’ information all would be fine," you might think. Oftentimes, however, relationships will trump even the best information.

We set out this example to highlight that there is another, often hidden power at work in our organizations: that of relationships.  We know intuitively that strong relationships are the underpinning of successful organizations but we pay little attention to this fact as we design and implement complex change.  As head of this hypothetical organization, armed with this new understanding of how your efforts are intersecting with the social environment, you would likely step back and find ways to: 1) understand the informal social structure and norms of your organization; 2) use that knowledge to support more effectively your employees as they develop new knowledge and skills – or build their capacity to do so; and 3) identify ways to develop a more collaborative culture. It’s unlikely that you would continue to push new ideas and practices into a dysfunctional system without attending to these underlying challenges that exist in your organization.  This work unfortunately takes time.

Across the country, educational leaders are struggling in the current policy context of more challenging standards, increased accountability, reduced budgets, and limited community support, while also trying to bring about educational improvements at all levels of the system.  We wonder whether the current movement, based upon many of the same premises of standards and accountability that drove of prior reforms, has now created a thousand and one ways for schools to fail rather than changing the course of action and leading to the difficult work of changing the informal structure, norms, and culture described above – i.e., to build the capacity of these systems to bring about change.  Given the limited success of these efforts in most settings, particularly in large urban districts, it is time to shift the policy and reform attention from the school site as the unit of change to zooming out and exploring the systemwide context of reform: the horizontal and vertical social ‘ties’ between and among central offices and site leaders in a district enacting reform. In other words, it’s time to focus at the relational level.

Most of the current reforms focus on technical aspects of educational change, such as curricular resources in mathematics education. Perhaps just as critical (and much less attended to) are the relationships between and among educators in the implementation and sustainability of complex change.  What we mean is that just giving math teachers new resources will not necessarily bring about deep change in their beliefs and practices.  Research has found that schools with collaborative or trusting cultures are more likely to show signs of improvement and innovation (see for example, Bryk & Schneider, 2002).  Complex change of the magnitude that we are expecting in the current educational system, particularly in the most challenging communities, requires attention to capacity building and relational trust – two critical, system-wide components that are overlooked in the current reform agenda.

Fortunately, the tools exist to understand what system-level coherence (or its lack thereof) looks like. We have been using social network analysis (SNA) to understand district change processes by examining underlying relationships and the extent to which the systems display trusting and collaborative cultures and coherence, as suggested above.  SNA is a well-established tool and perspective in disciplines like sociology and social psychology, but it has been less used in education. SNA captures the social capital that exists between individuals through visual maps of relationships or connectivity. Social capital refers to the idea that there is “value” in our relationships and that important resources, such as knowledge, information and advice, can flow between individuals through these relationships. The pattern of relationships across individuals creates a kind of web or network of interactions. Here we provide an example of what can be learned from SNA and how that helps us to understand why the current policy reforms may have had such little success in bringing about improvement. 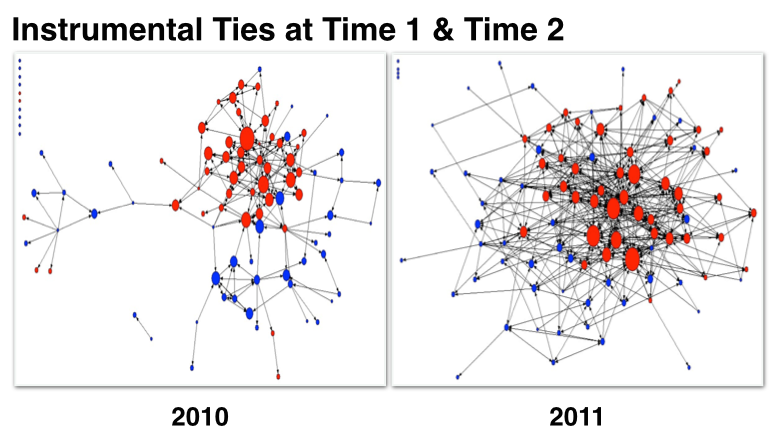 In this particular study we looked at the exchange of ‘expertise’ between central office and site administrators. Our findings indicate that there was a great deal of expertise sharing between the central office administrators (red nodes) and limited expertise exchange between site administrators – i.e., principals (blue nodes). Also on the left of the network map are multiple nodes, representing district and site leaders who are “isolates.”  This means that no one seeks them for expertise, nor do they seek anyone. We see this as lost social capital in the organization, which in the current climate no district can afford.

Some of the nodes are larger, indicating individuals who are more sought out for expertise in this district. As these maps show, and perhaps not surprisingly, the central office leaders play an important role in the exchange of expertise, yet as we know from our work and the work of others (e.g., Honig, 2008) many central offices are oriented toward compliance rather than support and capacity building.

Research from outside of education (e.g., Reagans & McIlvey, 2003) suggests that the overall structure of the network at Time 1 (i.e., Year 1) would only be effective at transferring routine information such as schedules or policy changes, but would not be effective at diffusing the types of complex knowledge that are necessary given the current policy context. One year later (Time/Year 2) we see that the previously peripheral site administrators (those with fewer connections) are better connected to one another, and the network is more cohesive. This increase in ties was related to district-wide discussions of these network maps and resulting creation of additional collaborative meeting time. In other words, when administrators realized information was not being promulgated effectively, they decided to address that problem, and they succeeded.

In addition, there was a changing orientation of central office leaders toward identifying ways in which they could better support school leaders around the reforms taking place.

Perhaps most critically, and unfortunately, during the same time period when these educational leaders increased work related ties, they also had a reduction in more affective relationships (e.g. trust).  These more “emotionally” laden relationships are important as they indicate something about the “quality” of the ties. Our own work as well as others suggests that these types of relationships are critical in supporting change. Absent these ties, in which individuals can engage in risk taking and exposing vulnerabilities, deeper work and the changes in practice may be inhibited.

As illustrated in the next two maps below, the leadership team lacked strong emotional ties in year 1: central office leaders connected with central office leaders, and principals connected with their fellow principals, but there were few connections across these boundary lines.  Importantly, by year 2, things had only gotten worse, with even fewer emotional or trust-oriented ties connecting these leaders.

Our research, which we have been carrying out for more than four years now in one mid-size and three large districts across the country, helps pinpoint where relationships both support and constrain the work of educational improvement (see, for example, Daly & Finnigan, 2011, 2012; Finnigan & Daly, 2012; Finnigan, Daly, & Che, 2013). 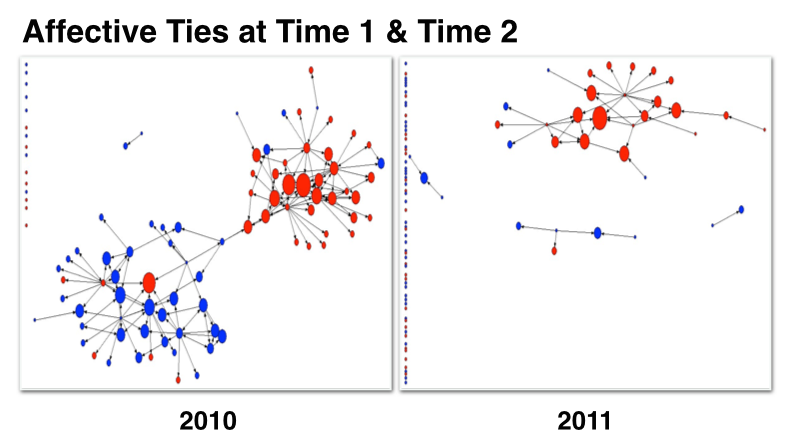 In essence, we suggest that before finding a thousand and two ways for schools to fail, it is important to start paying attention to the social side of educational reform.  In so doing, we suggest that networks are important for the exchange of resources and they can be influenced by intentional strategies that build upon the existing relationships (or lack thereof) between and among district and site leaders. This attention, however, must focus on strengthening collaboration and trust and not just technical knowledge. Yet, in the current climate of pressure and distrust, educational leaders and practitioners at all levels of the system have formidable challenges ahead if complex and authentic reform – and not just political rhetoric - is really desired in our educational system.

This is the first post in a series on “The Social Side Of Education”, exploring the idea that relationships, social capital, and social networks matter in lasting, systemic educational improvement. For more on this series, click here.

I think you're right that relationships matter. To take the analysis further, perhaps examine the time cost -- it's huge -- of building those authentic relationships.

One pole is "get a ton of work done, then roll out the policy without buy in." Another pole is "get a lot of buy in, and idea sharing, but huge huge cost to actually getting stuff done."

High performing charter networks struggle with this too, but I bet you'd see a different visual...