Today is the 49th  anniversary of the historic 1963 “March on Washington for Jobs and Freedom” in a year that marks the centennial of the birth of Bayard Rustin, the march’s principal organizer and chief strategist, referred to at the time as "Mr. March on Washington." Here, we reprint Albert Shanker’s 1987 eulogy to Rustin, who served as a mentor to both Shanker and Rev. Martin Luther King, Jr.

The death of Bayard Rustin last week is an incalculable loss to our country and the world. He was the last of the great giants - A. Philip Randolph, Martin Luther King, Jr. and Roy Wilkins - who brought us a grand, humane social vision and a dream of an integrated, democratic nation. I have lost a dear personal friend and inspiration.

Bayard was a gifted leader, but he headed no mass organization. His extraordinary influence came not from numbers and money but from his intense moral, intellectual and physical courage. He was a black man, a Quaker, a one-time pacifist, a political and social dissident, a member of many and often despised minority groups, yet he always believed in the necessity of coalition politics to enable minorities to build majorities in support of lasting progress.

He was a penetrating critic who had no use for those whose criticism merely destroyed and did not present a constructive program for change. He was an intellectual who could act and a visionary for whom no organizational detail was too trivial if it moved dreams to reality. Over his lifetime, Bayard was called everything from a dangerous revolutionary to a sellout conservative. The truth is that Bayard was a true democrat in a world of pretenders. Unlike those who lived by double standards and expediency, he remained constant to the principles and goals of democracy no matter what forces or insult were hurled against him.

Because of his devotion to high principles and standards, Bayard was at times perceived as an aristocrat, but democracy was in his bones, and so he was widely misunderstood by those who could not see the common roots of the two aspects of his personality.

He could not stay away from any place where people were brutalized and victimized, where democracy's promise of civil and human rights was denied or distorted. I can think of no one in our time who embraced a longer list of noble causes. In this nation, his public commitment to justice started with a lone, personal sit-in as a teenager in West Chester, Pennsylvania when he was refused service in a restaurant; and decades later it led to the great 1963 march on Washington and other civil rights demonstrations and boycotts, including one against the New York City schools to protest segregation. Along the way, he faced down white mobs in the South and black mobs in the North. 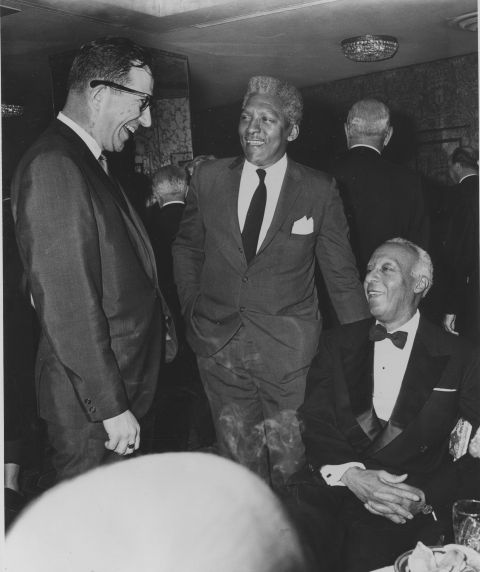 Albert Shanker, Bayard Rustin and A. Philip Randolph (left to right); credit: Reuther Library.
That courage cost Bayard dearly as he lost support from some former colleagues in the civil rights movement. But he endured because he believed that a genuine democrat was true to principles and that democracy was to be lived as well as proclaimed.

The list of Bayard's international causes is no less awesome. He recognized the close connection between supporting democracy and human rights abroad and expanding them at home when he saw Americans, after World War II, beginning to realize the terrible contradiction between fighting for freedom overseas while denying basic rights to blacks at home. So he went wherever there was injustice, knowing that the fate of peoples and nations everywhere was linked.

He protested the internment of Japanese-Americans in America during World War II and went to the camps. He traveled to India to help Gandhi. He worked on behalf of Israel and for Soviet Jews. He went to Africa to support anti-colonial, liberation movements. He was one of the earliest opponents of apartheid in South Africa.

After the unfortunate American invasion of the Dominican Republic, Bayard and I went there as members of the commission organized by Norman Thomas to insure that the Dominicans got free elections. Bayard also went to visit Vietnamese boat people and refugee camps for Laotians and Cambodians. As part of the International Rescue Committee, he helped to increase the number of refugees accepted into the United States. And many of us followed Bayard to the Helsinki Treaty Conference in Madrid to protest Soviet violations of human rights.

Summarizing the list of Bayard's domestic and international causes is to risk diminishing the magnitude of his achievements. What needs to be remembered above all is the line Bayard pursued all along. As C. Vann Woodward said, it "is the line of civil rights, equality, and integration, and the strategy of the ballot, the union card, and coalition politics."

Bayard knew that elections, unions and coalition politics did not always work perfectly. But, because he was as perceptive about the flaws in the institutions he believed in as he was passionate about his democratic beliefs, he worked tirelessly to correct those shortcomings. He was a man who, in his own words, "has a vision of equality and is willing to do those things that will bring reality closer to that vision."

And, he continued, "In such a social order there will no longer be walls, representing fear and insecurity, to separate people from one another. Such walls, whether constructed by whites or by blacks, are built to oppress and repress, but never to liberate. I admit that most likely we will not achieve such equality next month, or next year, or even in this decade. But it is a goal that we must hold ever before us, even in the darkest of times; and it not only confers dignity upon our struggle, but it should indicate to us how we must act toward one another today if we are to preserve for tomorrow the possibility of a just society."

Above all, Bayard was a great teacher who deeply moved all who came to know him. There was much in his life that would have prevented a lesser person from making a positive impact on his society. He grew up as a black in a largely Jim Crow world. He had once been a Communist, then a democratic socialist.

He was a conscientious objector who spent time in jail for his pacifist convictions. He was a civil rights activist who served time on a Southern chain gang. He was a homosexual. Any of these would have been enough to stop many others with less strength and conviction. That they didn't stop Bayard tells us a great deal about him and his greatness. And, if Bayard were here, he'd say that it also tells us something about our country.

There was no one like him, nor will there be again. We will miss him beyond measure.