Over the past few years, one can find a regular flow of writing attempting to explain the increase in teacher attrition. Usually, these explanations come in the form of advocacy – that is, people who don’t like a given policy or policies assert that they are the reasons for the rise in teachers leaving. Putting aside that these arguments are usually little more than speculation, as well as the fact that they often rely on highly limited approaches to measuring attrition (e.g., teacher experience distributions), there is a prior issue that must be addressed here: Is teacher attrition really increasing?

The short answer, at least at the national level and over the longer term, is yes, but, as usual, it’s more complicated than a simple yes/no answer.

Obviously, not all attrition is "bad," as it depends on who's leaving, but any attempt to examine levels of or trends in teacher attrition (leaving the profession) or mobility (switching schools) requires good data. When looking at individual districts, one often must rely on administrative datasets that make it very difficult to determine whether teachers left the profession entirely or simply moved to another district (though remember that whether teachers leave the profession or simply switch schools doesn’t really matter to individual schools, since they must replace the teachers regardless). In addition, the phenomenon of teachers leaving for a temporary period and then returning (e.g., after childbirth) is more common than many people realize.

The only national source of good data on teacher attrition (and mobility) is the Teacher Follow-Up Survey (TFS), which is administered every four years to a nationally representative sub-sample of educators from the Schools and Staffing Survey. The last administration of the TFS was in 2008-09. Let’s take a very quick look at the trends over the past 20 years (for a deeper look at the 2008-09 data, see this post).

The simple graph below presents the percentage of public school teachers, in each year, who left the profession (“leavers”) or switched schools (“movers”), along with the total of the two rates (“total turnover”). Notice how the range of the vertical axis is only 0-18 percent, which means that small changes might appear a bit larger than they would using a wider range. 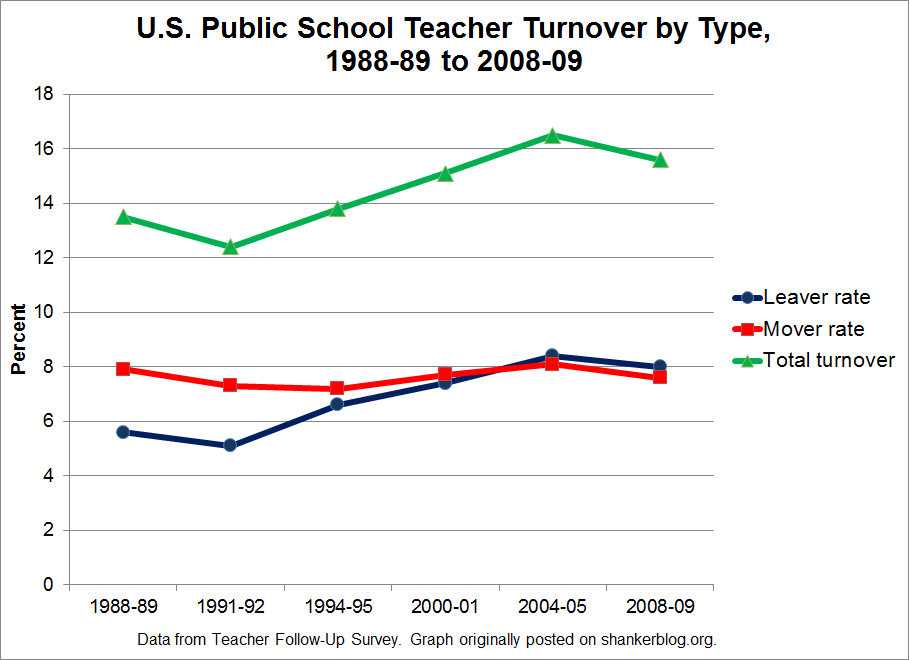 You can see that the mover rate is relatively flat – roughly 7-8 percent in each year. There was, however, a considerable rise in the leaver rate between 1991-92 and 2004-05 – about three percentage points. The change is statistically significant and educationally meaningful.

Why did the leaver rate increase during this time? One plausible explanation would be increasing retirements among baby boomer teachers. This seems to have made a difference, but, judging by the TFS breakdown by reasons for leaving, it does not come close to explaining the full increase.

The other common explanation for this rise in teacher attrition/mobility, as mentioned above, is new policies, most notably test-based accountability regimes, that have proliferated since that time. This is impossible to prove using simple descriptive statistics, but it bears mentioning that the beginning of the increase in the leaver rate predates NCLB, the most significant manifestation of these policies, by about ten years.

It is, however, very important to note that the trend itself may be changing. You’ll notice in the graph above that the leaver and mover rates begin to drop back down between the 2004-05 and 2008-09 school years. This may be due, at least in part, to the fact that the recession was just getting started toward the end of this time period, as employees in general are of course less likely to leave jobs when the labor market is unfavorable. Moreover, it is plausible, if not likely, that the next round of the TFS, which will be released rather soon, will show that the rate dropped down even further, as the recession took hold.

(And this cuts both ways - The sharp increase in attrition during the 1990s may have something to do with the strong economy and job growth during that time.)

In other words, teacher attrition and mobility don't occur in an educational vacuum; labor market conditions matter a great deal for labor market behavior. This is sometimes ignored in discussions of trends in teacher turnover.

Another big point, which is also obvious but worth mentioning, is that the national rates might be masking more substantial changes in certain districts, or in certain types of districts (e.g., big cities, though leaver rates are actually lower in cities than in suburban and rural districts).

Specifically, since a range of factors that are associated with turnover, such as working conditions, tend to hit some districts and schools harder than others, it may be the case that attrition and mobility are jumping more severely in these places, and being “hidden” by the aggregate figures. It is also true that certain subgroups of educators, such as first-year teachers, exhibit levels and trends of leaving/moving that differ from the overall figures.

In general, teachers leave for a variety of reasons, and this attrition, in addition to high mobility, can present a serious obstacle for schools and districts around the nation. Identifying causes and possible solutions can help to address this problem, but it's important to begin by looking closely and thoroughly at the available data, rather than making assumptions about what those data show. And it's always good advice to avoid using issues such as this one as a vehicle for promoting policy preferences without solid evidence, especially since there is a fair amount of the latter.