An Uncertain Time For One In Five Female Workers

It’s well-known that patterns of occupational sex segregation in the labor market – the degree to which men and women are concentrated in certain occupations – have changed quite a bit over the past few decades, along with the rise of female labor force participation.

Nevertheless, this phenomenon is still a persistent feature of the U.S. labor market (and those in other nations as well). There are many reasons for this, institutional, cultural and historical. But it’s interesting to take a quick look at a few specific groups, as there are implications in our current policy environment.

The simple graph below presents the proportion of all working men and women that fall into three different occupational groups. The data are from the Bureau of Labor Statistics, and they apply to 2011. 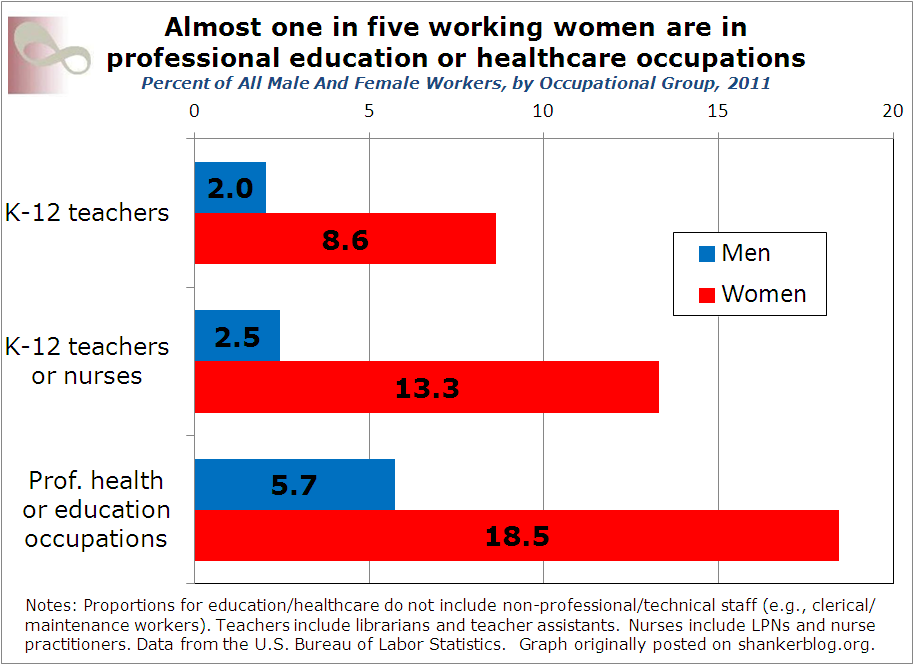 Although it’s hardly news, it’s still rather remarkable that, as shown in the two bars at the bottom of the graph, almost one in five (18.5 percent) working women are employed in either education or healthcare occupations, compared with only about one in twenty working men (note that these figures include only professional and technical workers in these fields, and not other types of jobs, such as clerical or maintenance workers, who may be employed within the education/health industries).

Of course, these broad categories include a number of different detailed occupations. In education, this includes both K-12 and postsecondary teachers as well as other professional/technical jobs, such as archivists, while the healthcare figure includes doctors, nurses, technicians, etc.

If we break this down a little further, it’s not surprising that the majority of women employed in these two general types of jobs are either K-12 teachers (about eight percent of all women, the first two bars) or nurses (about five percent, not shown in the graph). If you add the two together (as shown in the second two bars), around one out of every 7.5 working women is either a nurse or K-12 teacher.

Needless to say, men are also heavily overrepresented in many broad occupational areas. For example, around one in ten working men are in construction and extraction jobs.

But the point here is that healthcare and education are among the two policy areas currently undergoing the most drastic changes at the federal, state and local levels. To the degree this influences, whether positively or negatively, the employment situations of workers in these fields, almost one out of every five working women might potentially be affected.