The False Conflict Between Unionism and Professionalism

Some people have the unfortunate idea that unionism is somehow antithetical to or incompatible with being a professional. This notion is particularly salient within education circles, where phrases like “treat teachers like professionals” are often used as implicit arguments against policies associated with unions, such as salary schedules and tenure (examples here, here, here and here). 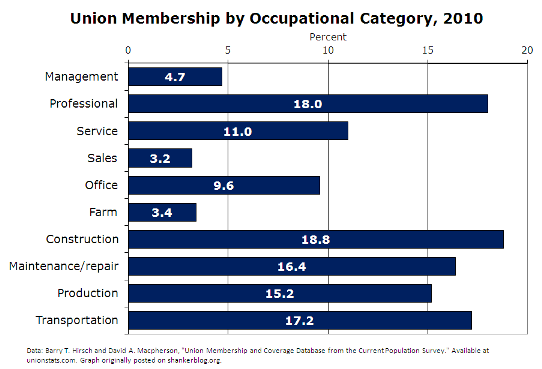 Needless to say, this high rate of membership is largely driven by teachers and other public sector employees such as nurses. For instance, if you remove teachers (K-12 and postsecondary), the membership rate decreases to around 8-10 percent, a bit higher than the national rate for private sector workers.

There are also plenty of unionized professionals in the private sector, including engineers, journalists, scientists and healthcare workers (and there would be more but for restrictive state laws). These workers, like their public sector counterparts who are also union members, are no less “professional” as a result. The very suggestion is absurd.

In fairness, though, the core issue among those who perceive a conflict is not with membership per se, but rather the policies often associated with unions, such as automatic raises and due process.

It's certainly true that unionized professionals have struggled to calibrate their role as knowledge workers who value the individual pursuit of excellence within the context of collective bargaining in a rapidly-changing labor market. But professionals - including "classical professions" such as physicians - are heavily unionized in many other nations, and their unions are often seen as partners.

Moreover, in these nations, the very practices some people find incompatible with professionalism, most notably job protections, are not at all unusual. For example, despite recent pressures, many European workers have strong protections against individual dismissal, as well as, on average, more job security in general than U.S. employees. In fact, U.S. workers have among the lowest levels of security of any OECD nation.

Everyone is entitled to their own conception of “professional," and there is no one universal definition. But, traditionally, professions establish “jurisdiction” over a specific set of complex tasks or knowledge, and they monitor the quality of entrants via means such as formal training regimens, professional associations and licensure. Incumbents of professional occupations typically have autonomy to practice their craft and police themselves.

By this standard, being “treated like a professional” is not really about how you get raises, and a worker's professionalism does not vary by how easily he or she can be fired. You need not agree with these policies, but professionals are what they do, and the fact that many millions of them belong to unions does not change that one bit.

How many actual professionals ever rely so heavily on salary schedules?

So I guess the answer is none.

I don't know how many use formal schedules (if you do, please share), but I'm certain that many professionals have arrangements - whether formal or informal - to receive annual raises.

Either way, the point of the post is that being a professional - and the concept of professionalism - is not about salary structures, job security, etc. You don't have to like these policies, but they don't determine whether workers are professionals or treated as such.

I've fairly certain I've mentioned airline pilots to you before.

So, you know damn well that there is another profession that has traditionally been dependent upon salary scheduled.

I am also fairly certain that I have pointed out to you know that salary schedules are not about the profession, but rather are about the organization in which they work. When professionals are the the frontline workers -- as opposed to generally being management -- and treated largely as widgets within large organizations, their compensation structure is often quite like that of non-professionals.

In fact, the historical reason why we have salary schedules is that the evalautors were not trusted to make salary decisions. In fact, the evaluaters/supervisors were not trusted -- by the central offices -- to make any number of decisions, or perhaps did not want to be bothered to do so. We have salary schedules NOT because teacher unions or teachers have insisted upon them. Rather, we have them because district administrators have put them into place and because they are easier to administer.

Ceolaf -- you must be referring to a discussion that has completely vanished from my memory. In any event, whether or not we call teaching "professional" seems to be completely semantic, not substantive. What of any substantive consequence would follow from calling teachers "professional" or not?