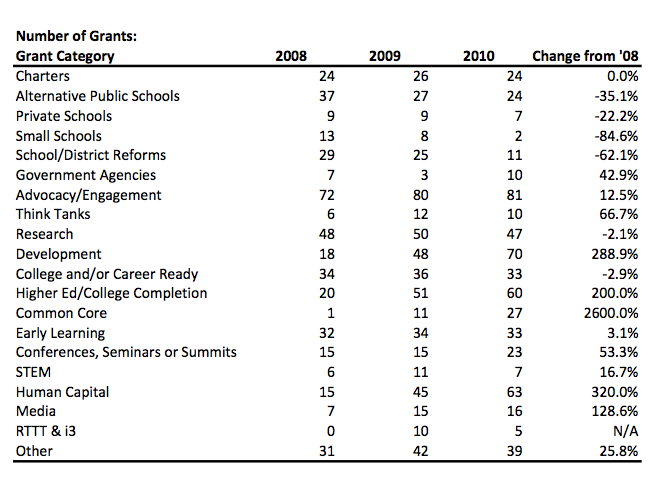 Permalink
I too would like to know the nature of the grants within these categories, especially advocacy (since Gates has been contributing to ALEC), but as well the development grants beyond the MET. It is in this information that we can discern the ideology behind Gates. As to the conclusion about flexibility, it reveals one danger of reform from the philanthropic elite: easy come easy go. As to Philip Kovacs' question--nose held: philanthropic elites, no matter what kinds of education they support, present a danger to the democratic potential of education. I don't want rule by any oligarchs, benign or not. http://education-radio.blogspot.com
Submitted by barbara madeloni on March 4, 2012
Permalink
Is it true that the Gates foundation is funding/developing student evaluation software for mandatory RTI student assessment?
Submitted by Chris Plante on November 21, 2012
Permalink
So, now we know what you think of these numbers. Tell us what you think of what Gates and ALEC are doing to public education.
Submitted by TFT 2 on March 2, 2012
Permalink
These Common Core Standards have some potential for usefulness in identifying middle school students who have obviously fallen behind in basic skills and may deserve support for the remediation of these deficits in after-school tutoring centres like those I taught in in east Asia. It is a pity that so often those who could use such extra supports are unable to access them because of poverty. The Gates Foundation should consider granting support for initiatives to develop such links between our neediest students and such institutions that could help them, which are currently authorized under No Child Left Behind.
Submitted by Bruce William Smith on March 2, 2012
Permalink
Any ideas on why support for alternative schools declined?
Submitted by john thompson 4 on March 2, 2012
Permalink
This is good work Ken! Hold your nose for a second. Do you think the Gates Foundation could be convinced to shift resources towards more democratic/humane forms of schooling? Just curious....
Submitted by Philip Kovacs on March 3, 2012
Permalink
thanks Ken this is fascinating. some follow-up questions: Where does the national data center fit in that they have already given more than $76M, over 7 months, which will hold confidential teacher and student data and be operated by Murdoch's Wireless, euphemistically known as the Shared Learning Collaborative? Also can you be a more descriptive about the types of advocacy groups Gates is funding, what issues they focus on, and how many are start ups that rely heavily on the Gates' funding? I'm also very interested in the media category: what does this include aside from Education Nation &amp; the Media Bullpen? does it include the NPR grant? Finally, what is the "development" category? Usually I think of that as fundraising, but this is clearly not what you mean by it if you include the MET project (which might also be tagged as research.)
Submitted by Leonie Haimson on March 3, 2012
Permalink
Since the purpose of this post was just to provide descriptive information about funding, I'm going to refrain from speculating about past changes or future shifts in programs. Keep in mind that I only looked at the years 2008-2010. That means some grants (e.g. ALEC and SLC, both in 2011) are not included. For those interested, the dataset I assembled for this post is available at the link below: http://shankerblog.org/wp-content/uploads/2012/03/gatesprograms08to10.xlsx
Submitted by klibby on March 5, 2012